His Grace Dr. Philipose Mar Chrysostom and the Greatest Ever Prime Minister of India, Mr. Narendra Damodardas  Modi spent (some) time together, says a tweet by Mr. Modi himself. A photo attached to the tweet shows the two holding hands in the best of India’s great traditions. 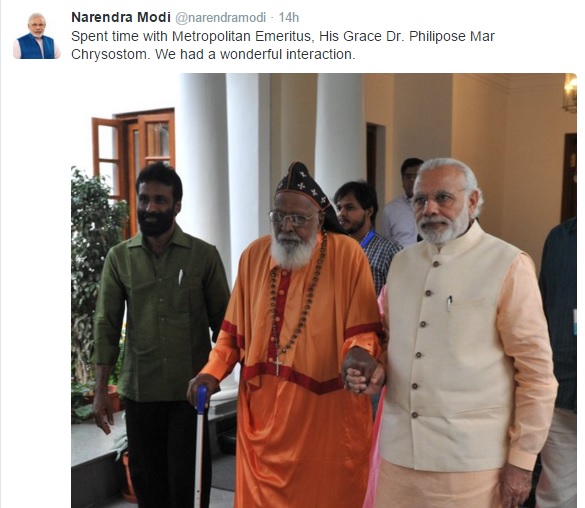 The Bishop (or Metropolitan) heads  the Marthoma Syrian Diocese.   Syrian Christians or St. Thomas Christians are possibly the oldest surviving denomination  of Christianity in the world. Mar Thoma means St. Thomas, the founder of the church, who came to Kerala in the first half of the first  Century and converted a few Jews already living in South-West Coast of India, then known as the land of spice. He is also said to have baptised some  Brahmins by impressing them with a sleight of hand. Thus is the Genesis of the flock of Christ’s  sheep that the Metropolitan-Bishop now Shepherds.

Now Kerala is God’s Own Country – the rest of the Universe being on lease to Him. (Billy Graham, eat your heart out). It follows that Malayalam, the tongue-twisting language spoken in God’s Own Country is the language of God. There are proofs, if you must,  other than its location to that honest claim. Try  spelling M-A-L-A-Y-A-L-A-M backwards.  What did you get? Malayalam. Another proof is that there are any number of churches,  any number of Bishops of any number of Christian variants,  more than half the population of convents of the world and, to cut short, any number of choir-singers in that beautiful lush-green Land  of Eden – many more than you could  find in that treeless place the size of a football ground called Vatican.

So, on being guided by hand by the Great Prime Minister Ever and seated in the august back office,  the Bishop cleared throat. As if on a cue,  The Prime Minister rattled on all about himself in Hindi, which is the language of gods- not just one God, but of thousands of gods.  Hindi is also the National language of entire India (so say  North India), which claim sometimes makes possible  a cordial meeting between fierce arch-rivals  Amma, the great Mother of Tamils, and Kalaignar – meaning Artist, the antique Supremo of the rest of the Tamils. Tamils don’t like Hindi, yet, surprisingly, they conferred the title of  Maperuma Talaivar (the Greatest Supremo) on Mr. Modi for saying a couple of Tamil words when he visited Tamil Nadu,   the great land  of Action-hero gods,  at the instance of Amma, the obese living goddess and the reigning Chief Minister.

In any case, when the subject is himself, which has never been otherwise, Mr. Modi prefers to speak in Hindi. Once  Mr. Obama made an attempt to say a couple of words of greeting  in Hindi while visiting India. As a matter of reciprocal courtesy,  Mr. Modi spoke in English when he made a courteous visit to the White house. Two minutes through the conversation, Mr. Obama called for an interpreter.  Which finally proved that Hindi is more an International language than English.

Let’s not detour. The Prime Minister asked the nodding old priest if he had seen a garbage dump on his way from the airport. The Bishop nodded differently to mean  that  he didn’t understand a word. Thus satisfied, the PM spoke about the million lavatories he built. “Have you ever heard of a world ruler who built thirty million lavatories and opened two million blank bank accounts?” he asked, trying to be careful to speak in a low thunder. Finally he dropped the bombshell which had always earned him the loudest applause in India and abroad:

“NO POWER ON EARTH CAN MAKE INDIA DIRTY!”

Since the Metropolitan did not seem inclined to clap, Mr. Modi himself clapped.

Taking the clap to be his cue,  the revered Bishop set off  giving voice to a sermon that he had written and re-written, in Malayalam,  till that was all he remembered other than the Lord’s Prayer in the ancient Syriac language. He intoned, in his soft, shivering  voice and the reversible Malayalam language, his plea that his brand of Christians be left alone, their churches be not stoned,  and since  most of his flock do not convert to richer denominations for  lure of money, cheap bullock-beef is their only source of protein, that the aged bullocks that came from Tamil Land were going to die anyway, hence butchering them must not be counted as murdering the sacred paramours of Cow-Mother and  hence the Surianis eating them  be spared, that his own flock will not raise a finger if the people of the Katholica Sabha (Catholic Church) were beaten up for wearing a cross, or carrying a Bible.  He continued that Surianis, his flock,  will not make a riot and set fire to public buses and police jeeps even if the followers of the Pope were publicly executed for  such heinous acts as eating their kind of  beef soon to be listed as one of the most horrendous crimes requiring spontaneous execution by stone and sticks on the list that would be added to the Preamble of the Constitution after erasing such anti-national  words as ‘fraternity’ and ‘Secular’ from it. Finally, he congratulated the Great Prime Minister for the police-raid that was ordered on Kerala House, the guest house for politicians  that also served as a domestic embassy of Kerala  in the Capital. Hindu sinners, who should worship the cow and drink its urine were making the price of beef go over the roof thereby making it difficult for his own flock to buy any. “We people of different religions should work together,” was the Bishop’s solemn concluding message.  It was the best sermon delivered by a 95-year old priest in God’s own reversible language.  Ever.

In the discussion that followed, Malayalam words  flew over the Prime Minister’s bald head while Hindi zipped  over the holy Polka-dot hood of the Bishop. A few moments later, as if on cue, the PM stood up and helped the aged man rise.  The  massive fist of  the  Greatest-ever-Leader grabbed the limp, age-darkened hand of the ancient priest (see the picture again if you need proof). Then Mr. Modi graciously led the  priest out and gave him a gentle shove when he thought the old man  was about to say something more in his incomprehensible God’s Own Language.

This meeting  that lasted more  than three whole minutes, held  in the most cordial atmosphere, went on to show why India does not need a mischievous United States Commission on International Religious Freedom (USCIRF) to come visiting and vitiate the peaceful religious co-existence in this Country ever since Mr. Modi took over. The members of the Commission, in the meanwhile, are  yet  to recover from the shock of being denied a visa by what they always thought was a humble, dependable,  third-world country!

The peons,  bearers and lowly clerks (the most informed lot in the Secretariat; and always entertained generously by the media men) congregating in the corridors of the South Block at tea-breaks  reminded each other that the same Goras  (white simpletons) had consigned Mr. Modi’s US Visa  to  a deep freezer  in  2003. It was re-heated and humbly delivered to the Master in 2013 without even  being asked.

“Serves the Amrikaans right,” declared a Peon who proudly wore a broad, red cross-belt bearing polished brass inscriptions over his sparkling white uniform,  which was the sure indication of his proximity to the greatest and the broadest person within the imposing edifice.