Bally, our fluffy little dog,  led me down the concrete path that ran along the gently swaying waves of the bay . The view was fantastic, the air smelt sweet from  raat-kI-rani flowers that blossomed as soon as the bitter chill turned into a nip in the air.  Stark-naked frangipani trees were  trying to put out green twigs and  fresh shoots.

On our  left side, among  the proudly erect palm trees, the grass had turned patchy brown in the bitter cold. It would take a couple of months before the new shoots will get back their lush, almost  sexy look. The authority had laid cemented clearings, some forty-foot squares, evidently  for the citizens to do physicals.  On one with a roof, 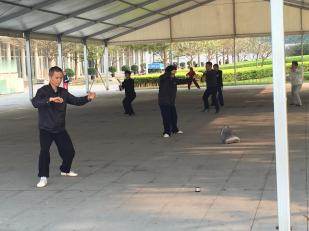 a number of  men and women did  Tao-chi to slow music. In the next, some  did brisk leg-and-hand movements to faster Chinese Rock.  As we walked along, Bally barked at  an elderly man who  kept banging his back against a palm tree. Another old man, his torso bare and sweating in the cold air, his clenched hands held high, ran past us on flat shoes.

A lone woman in black leggings and T-shirt with a sweater tied around her waist, had one leg raised all the way up above  her head-level, pressing  the  toe on the trunk of a tree. When she noticed the dog and me,  she put the raised leg down. I felt embarrassed. Perhaps she had  noticed that I stared, just for a moment, the 175-degree geometry drawn by her parted legs.

She smiled while I made a quick appraisal.  She had larger than what you would consider Oriental eyes.  Light, smooth skin without a trace of hair. Pretty, though not beautiful,  her  face let  me put her at late-thirties or early forties. She smiled, showing even, faded teeth. I was yet to see  a set of pearly-white teeth or puffed-up butts hereabouts in China where women maintain their figure like Hollywood film stars but have boyish behinds.

She bent down and patted Bally, and murmured “cute”.  Always a Casanova, the fluffy Pomeranian responded by unsheathing his pink tool  and trying to mount her plump muscular leg. The Son-of-a-bitch always embarrassed the family with his way of displaying affection. She stood up.

I thought I read her mind:  Master stares, the dog takes the next step.

“Where you come from?” she asked.

“India,” I said, hoping that the query held no accusation.

A single stare shouldn’t taint my Motherland’s reputation. The Prime Minister had come here a few months ago and assured the diaspora that we were all ashamed to call ourselves Indians before, but now we could be proud because he was in the chair. We had clapped our hands dutifully, but later asked each other: when were we ever ashamed?

“Yes, same as this Country, in Asia”, I said, rejoicing in the discovery that she had not connected my one-second stare with Bally’s attempt at seduction.

“Where are you from?

“Oh,” She pointed a  finger to the ground. “Here, this same place.”

She picked up what looked like a blunt sword, evidently  another exercising apparatus,  from the ground and fell in step. She took Bally’s leash from me. Bally seemed to like the gesture and trundled alongside her.

”No, no, no, you got class. We got no class.” She emphasized the word, class.

What appeared to be an abject confession amazed and embarrassed me.

“No, no. you got class too. You are second in Asian economy, we are third.”

My crest and all the feathers crashed.

“You mean caste. High caste, low caste, untouchable. That was so long ago. No such a thing anymore.”

“Now. I show you news. Shanghai  Daily. You got no freedom talk also. If you talk class, danger. Very danger, very backward.” She flung her hands in a gesture of sympathetic despair. The sword-like exercising apparatus rose in the air along with her fist.

I gulped, considering  the risk in making a strong retaliation. A Chinese in China, lecturing me on freedom of speech?

We had to take a turn to enter the way home  through a garden. A real garden with tall trees and exotic plants,  also with exercise equipment showing up at unexpected  places. An old woman laboured on a static bike. Further up, a man did the twist on a contraption that turned in half-circles left and right  as he stood turning his body, holding on to a handle to keep balance. His small radio that sat atop a stone pillar blared an ancient Chinese tune. A man, older than the one I had seen doing it  before, kept banging his back against the knuckled trunk of a tree. Further ahead, a young teenager frantically  worked her legs on a wooden contraption designed to serve as an elliptical machine. As she moved, her ponytail flew high and sideways. Some two hundred metres ahead, a middle-aged woman came walking backward  towards us, rarely taking a  glance in our direction. Perhaps she sensed our presence, swerved to one side, and kept steady steps, still backward in a straight line.

These Zongwen are funny, I said to myself. Strangely, they all look slim and well-formed –  whatever their age or gender,.

A couple of white children with hay-coloured hair cycled past us on the narrow garden path. Their parents followed them on bicycles, calling out to be careful in what could have been Spanish or French, I wasn’t sure.  The children looked at each other, giggled and cycled on. This place swarmed with Europeans, Koreans, Taiwanese and Japanese, many of them married to local women. And a few vice-versa.  It looked  as if the mixed pair had more than a single child each. Perhaps the mixed families came under a different family law – or maybe they take care to take the citizenship of the expat spouse. The Arabs brought their own well-packed wives.

“No Indu  freedom of tahk-speech.  I will show you Shanghai  Daily. A black boy told it is no good no-touch, we will fight don’t touch, and everybody beat him. Judge, lawyer, Party-member, Jingcha. Everybody.   Poor Boy dead.”

I laughed weakly, guessing that Jingcha meant police and that the poor boy’ was the newly famous Kanhaiya Kumar.

It occurred to me that  I had picked up her style of speaking English. Pausing  between words to transcribe the next thought in mind to the right spoken phrase.

“The boy dead, I tell you” she insisted.

“No,  He did not die. He is free.” I paused, once again the feeling of  shame overcoming  my conscience. “The judge put him in jail for two weeks. Maybe to stop the lawyer  and party-member from beating him to death. He’s back in the University.”

We stopped at the community gate. I pulled out my  card-like digital key and swiped it on a metallic box on the wall. The massive iron gate clicked open. When we entered the common hall, the security man looked up and said knee-how.  I returned the knee-how with a bow. Once in the hall, there was Internet.  .

I drew out my iPhone, which automatically picked up the signal and locked on.

“Here, let me show you,” I said, wishing to save as much of my national pride. I lowered the screen to her eye level.

It took a few seconds to get through the mandatory Chinese commercial on YouTube. Social media is officially banned, but the authority closed eyes on foreigners using a Virtual Private Network (VPN) to sneak out through a hole in the official  ban.

Kanhaiya, the 29-year old ‘boy’, was cheerfully speaking to his crowd of followers, occasionally pausing to raise his hand,  like a possessed   revolutionary, to scream a slogan or two, which the followers echoed with equal gusto.

I showed her the date marked on the screen.

“OK, then next  time they kill him. The party-man said –  I will show you Shanghai Daily – that he will get the gun and kill him,” She said, shaking her head  while handing Bally’s leash to me. I didn’t tell her that the party-man who promised to kill Kanhaiya for his speech was a member of Parliament, elected in our democratic Nation.

I did not ask her why she did not become a Kanhaiah Kumar against the inequalities and inequities in her Country. AS it was, I faced greater danger than Kanhaiya in my own country; I didn’t want to get into trouble in this.

As she turned left and walked away, Bally stared after her wistfully.  There goes another chance to screw a fleshy human leg, moaned  his face.