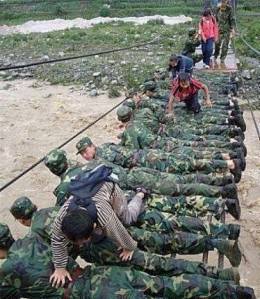 This is a photo I got by e-mail from my Australian friend, Llew. It is a part of the saga of disaster and rescue in our Country that claims unity in diversity.

It shows the resourcefulness of Indian soldiers – stationwise the least paid central government employees – when resources are rare. This is also what soldiers do “in peace” while two politicians from Andhra were assaulting each other for credit to be the first to ferry Telegus from the site of disaster.

You probably never saw this photo on TV or in a newspaper or a Tabloid.

You saw the photos of those politicians fighting on a tarmac for getting credit for being the first to airlift people from a particular state.

You heard about Narendra Modi taking pains to pick out Gujaratis to rescue them.

Those soldiers didn’t care where the stranded people came from. What were their religions? You would not know.

But I thank them.

One thought on “TWO PHOTOS – LEST WE FORGET”