Yes. These are supposed to be questions that would drive every atheist rushing to the nearest priest in town.

Obviously these happen to be the cleverest questions that the god’s people could ask. I can see why atheists do not waste their time. However, at my ripe old age, I guess I still have some time. My answers after the double arrow-heads>>

>> There always are a couple of laggards in every science community.  By the way, Kent is not a scientist. He had educated himself by correspondence in Christian Education from (also unaccredited) Patriot University in Colorado Springs, Colorado. All his known degrees are from unaccredited  institutions, and he has no training in paleontology. Hovind was convicted of 58 felony counts in November 2006[ and sentenced to ten years in prison in January 2007.  As for his  arguments on creation, Old-earth creationist  Greg Neymen wrote that Hovind’s arguments  would”embarrass the young earth creation science community as a whole. “

Duane T. Gish, Ph.D. (Biochemistry,) University of California, Berkeley on the other        hand, does qualify as a scientist and has, sadly, gone back to  his Maker, if there be          one. Gish’s arguments and evidences are against evolution, not arguments in favour        of Creation. Most of these arguments are what evolutionists themselves admit as             gaps in their theory. Having concluded that evolution is not proved, he goes on                 to state that “hence Creation is the truth; Jesus Christ is the savior.” You can read            his arguments in a lecture here.

>>If they had not turned, we’d be afraid of them.

>>You haven’t yet seen them spinning for millions of years, have you?

>>Purpose is important in you’re selfish mind. The universe and the life forms in a few rare planets within it because they are there, their transformation and evolution are a logical process. The “purpose” of your life could have been defeated by a rubber sheath called condom. You just happened to have got away.

>>The shroud is carbon-dated to the middle ages, not AD 0000 . The impression on the shroud, if it be real, is of a much older man.

The experiments were carried out on fibres taken from the Shroud during a previous study, in 1988, when they were subjected to carbon-14 dating.

Those tests, conducted by laboratories in Oxford, Zurich and Arizona, appeared to back up the theory that the shroud was a clever medieval fake, suggesting that it dated from 1260 to 1390.

I have, by the way, watched the image of the Hindu elephant God formed by rain water on a wall;  there is a rotten body kept in a casket in a Church in Goa supposed to be the miraculously preserved (but far less preserved than Egyptian mummies) of St. Xavier. 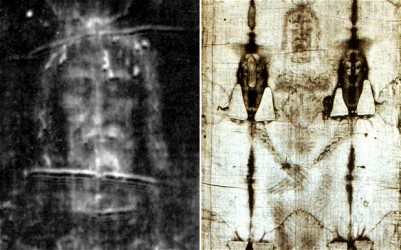 A reputed lady in Pune showed me a stone which had been carved by nature to resemble the face of a ‘Baba’ who was her idea of God; and you’d find in many an aquarium a gold fish with streaks resembling  the word ‘Allah’ on its flanks. Of all these, the digitally processed image on the Shroud of Turin appeared to be the most dishonest.

>>Monkeys do not bear children in captivity. However, they do bear Bible lovers outside. Look around, you’d find many

>>Fools abound in the world. There are some who go to casinos, others who  go to churches, some even piddle on walls.

>> Does Bible mention Grand Canyon? Did it know of the American continents or anything beyond the Middle East? Scientific studies show that the Colorado River carved a course through the area about 5 to 6 million years ago. Since then the river has driven the down-cutting of the tributaries and retreat of the cliffs, simultaneously deepening and widening the canyon.

>> Of course. He loves me so much that if I don’t accept that he was born of a virgin (which he never claimed), that he was the son of god (while he called himself son of man) and that he alone can save me (though he could not save himself), then he will put me into hell fire till eternity. So his love is like: scratch my back, or I’ll kick your arse for ever.

>> Counting together all those murky and mutually warring denominations, there are some 2 billion Christians, and 5 billion non-Christians. So you should ask why Christianity is so unpopular.

>>They are not saved, but fooled. Some of them fool the preachers by taking the money and then going back to worship their own little gods.

>>They all exist, but intelligent people give them better names

>> I have not known Richard afraid of debating anyone, though he does seem to get flustered with a biased and  jeering audience. I guess nobody gave Ray Comfort a platform for challenging Richard.  Considering the background of Mr. Comfort and that of  Mr. Dawkins, where was the time and occasion or a common platform for both to meet?

>> Yes. In January 2012  Christopher was saved from having to answer foolish questions like these and left the ordeal to me. His only regret was he missed the day’s morning newspaper.