One morning in early August 2003,  I stood outside the gate of a popular British-run school in Dhaka, Bangladesh. A Board on the gate warned that it was a Christian school, and that admission was not available to locals.  Because it was a missionary school, I was later told, the government prevented the school from admitting local Muslim boys.

The principal I met was a suave, bright young Englishman, who was pleased with the child’s  replies and claims that he could play cricket, swim and skate-board. The school encouraged sports, said the principal. After contemplating my name and the child’s for a couple of seconds, he warned me that the school stressed on Christian values. I said, quite sincerely, that we respected all values. My grandson was a mild-mannered boy. He might not mind turning the other cheek or sharing his lunch with his neighbor.

For several months, we were pleased with the  child’s progress, his diction, his interest in homework and in cricket.

Then one day he came home with a project for his homework. He had to choose an animal of his liking, paste a picture of it on his worksheet, and write ten sentences on the creature of his choice. He asked me to get him a picture of a dinosaur to illustrate his first literary effort. I downloaded a terrible-looking Tyrannosaurus Rex and printed it on my inkjet. He laboriously read a Wikipedia article on the dinosaur, and wrote a few lines in his childish hand. When done and the colorful picture was put in place, he felt  sure that his would be the best project in the class, and that he would get a star for it.

In the afternoon, he came home in tears. He tore up the paper that contained the dinosaur’s picture and description while I watched him in dismay.

“The teacher said” he heaved through tears, “the teacher said that dinosaur is not a creation of God. It’s a lie because it is not mentioned in the Bible”.

“Grandpa, you cheated me. Dinosaur is a lie,”. To a six year-old, the teacher knows everything.

Fortunately, it was near the end of the term for him in that class, and I persuaded his mother to transfer him to any other school. I checked with the American School if they taught Genesis to young minds. The Principal, also suave and bright, said smilingly : “No, we teach regular subjects.”

Fortunately, eleven years on, my grandson has forgotten his lessons in Genesis.

I will not repeat the sad story of Galileo; it has been beaten flat with repetition through centuries. In early nineteen eighties, however, Pope Paul II met Stephen Hawking and a few scientists of his ilk and suggested : Up to Big Bang is fine, but do not go into the origin of it because that belongs to the realm of God.

The scientists probably felt pleased that even the Papacy was evolving. The Pope was obviously implying that the Big Bang Theory could be right.

They had another think coming. Pope Benedict XVI, who preceded the current Pope, trust me, set the Vatican clock right back to early seventeenth century. A couple of years before his ascendancy, he declared that it was right for the Church to deny Galileo Galilee; if later the church opted to be silent on the modern theory of a stationary sun and revolving earth, that was merely for political convenience!

The Council of Cardinals still elected him. Palace gossips, trial of a whistle-blower, trials and denials followed, and the old Nazi guard resigned mercifully.

His successor has come out with a big bang bursting the first chapter of the Holy Bible.  From the pulpit (or wherever a Pope is supposed to stand), he declared : Evolution and Big Bang theory are real.  God isn’t ‘a magician with a magic wand. 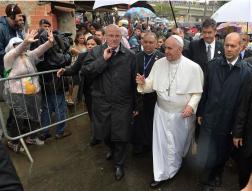 Don’t rejoice in this evolution. May be it’s short-lived. The Cardinals who elected Benedict are watching.

Many years ago a priest like this (people called him Rabbi so he must have been a Jewish priest during those days of Biblical anonymity ) was nailed  on to a wooden beam for views that differed from the textbook..