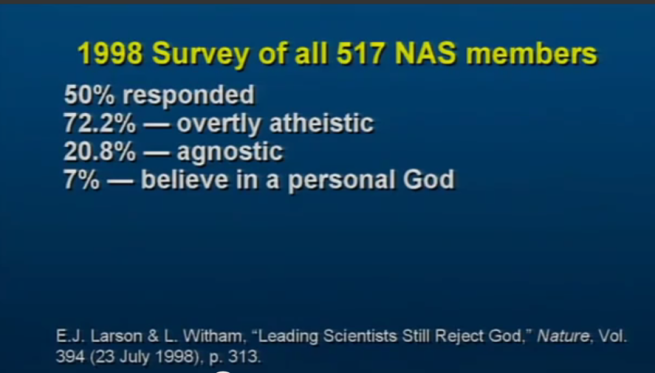 In a 1998 Survey of the National Association of scientists in the US, only 50% responded – the other 50 probably did not think it worth responding – and the results are as given above. I took this screen shot from the video of a lecture by Dr. Terry Mortenson, a Geologist who believed in Jesus. The rest of the 7% must be believers in Jesus, their personal God, since the survey was not done in Muslim Saudi Arabia or Hindu India. Since 1998, however, church attendance by the lay public has been steadily going down; there is no reason to believe that attendance by scientists had gone up. When Barack Obama nominated Geneticist Francis Collins to be the director of the National Institutes of Health, the scientific community made a hue and cry. They thought an evangelist Christian who believed in God’s miracles would not be appropriate for then “most visible job in science.!” Yet there are other eminent scientists in the Christian-majority United States (though probably not so in Europe) who believe that Jesus saves, no matter what your sin.
Why Jesus, there are scientists who believe in Lord Krishna, Buddha, Allah, Ahura Mazda or any other God. If I were a scientist who had little time in my hand to apply my mind to such ‘spiritual’ nonsense, I might stick to the belief system of my parents and be done with it. If they believed in Jesus, so be it, I would ‘believe’ in Jesus too, thinking, what’s there to lose? Religion is mostly an accident of birth. Georges Lemaitre declined to agree with the Pope that his theory of the origin of the Universe ( the Big Bang) was in consonance with the Bible, but practised Catholic priesthood and wore his priestly clothes wherever he went – including scientific conferences and seminars.
I know scientists, judges (at least one judge of the supreme court), high-end professionals and civil service officers who worshiped a fizzy-haired man (Sathya Saibaba) who lived till a few years ago. They believed that it was his presence that prevented a nuclear holocaust during the cold war.
In 2013, the chairman of the Indian Space Research Organization, Dr. K. Radhakrishnan, along with other scientists associated with the creation of a satellite modified to explore Mars, carried a model of the PSLV rocket and the satellite to Tirupati temple (where the Supreme Godhead Vishnu is supposed to reside) and had it blessed by the priests. While most other scientists would consider it shameful superstition, the satellite reached Mars just as planned (as against the failures experienced by more advanced nations including NASA) at the very first attempt and carried out all the work assigned to it. The credit went not to the people who toiled for years in planning, designing, calculating, programming, wiring, riveting and forging the space machines, but to a black stone in a temple. To many, these two converging coincidences constituted the real proof that the stone God of Tirupati Hills with his inscrutably painted face is the real God of the universe.

The most popular reason for believing in Jesus or any other superstitious God is Pascal’s Wager – what is the harm? If you believe and there indeed is a God, you are doomed and the non-beliver next door is doomed. Serves him right. If there is no God, then no harm done because you prayed. So wager for God.  However, Pascal made it clear that the wager held good only if it was laid on Jesus, the God who got crucifed, and none other.
We humans are basically gullible. Many of us honour gullibility by renaming it as faith. Jesus is one such God for the gullible. He appears to stand ahead of other Gods in terms of popularity because Christianity stole a march over other gullibility systems by first using weapons of mass destruction – like guns, gun powder (invented by a Chinese pagan of unknown identity) and dynamite (invented by a Swedish atheist) nuclear bombs (mostly the work of Jews led by a man of Jewish birth who preferred to quote Hindu scriptures), coupled with sheer cruelty, forced slavery as glorified in the Bible and general contempt for the rest of the world.