St. Thomas Aquinas (1225-1274) was a great thinker, philosopher and a scholastic 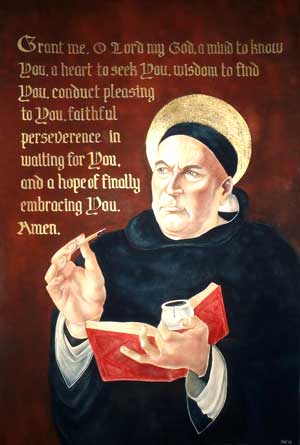 teacher. Scholasticism is critical thinking and debating religious issues as was practiced in the European Universities in the middle ages. it was not enough to prove that God existed by reading from a passage from the Bible. He had to prove the existence of God  by sound reasoning. Hardly any other Saint in the Catholic religion could be considered equal to Aquinas in his intellectual and theological mastery.

Aquinas’s urgency and strenuous efforts at giving a logical proof for the existence of God without having to refer to the Bible tell us that there were sceptics in Europe in the 13th Century. They had to be stopped with dialectics and not by call to faith – or they would put doubt into the minds of ordinary folks. 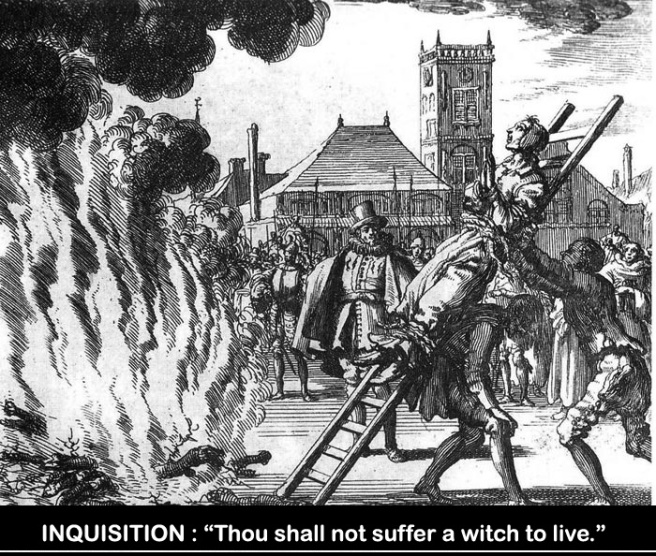 Aquinas’ arguments were presumably a supplement to the inquisition proceedings for disbelief ordered by Pope Gregory IX (1145 – 1241; Papacy 1227-1241). Inquisitional torture (breaking wheel, limb-tearing racks etc.)  and murder on burning stakes that must have become common place by the time Aquinas became a Dominican monk.

Though he lived for less than 50 years (which was a good enough age during those times), Aquinas’s fame as a man of God and a miracle worker rose high through Europe. While alive, his disciples had claimed to have seen him floating in the room in a state of levitation while in communication with his Master, Jesus Christ. If levitation was a prerequisite for communication with the living God  is not known. Nor is it clear whether Aquinas made such claims about himself.

Stories of Miracles of Aquinas after he died far outstrip the miracles of Satyanarayan Katha (Legends of Satyanarayana, a Hindu devotee who attained the status of God himself) recounted by Hindus of Northern India to bring about good tidings. A comet that shone over the monastery where Aquinas lived for more than three years while he lived and convalesced, but vanished upon his death. Years after he was buried, it was decided to move his body to another site. When the grave was opened, they found the body intact;  a sweet perfume permeated the air. A claim that probably inspired the Islamic claim that bodies of Muslim martyrs remain fresh even after 14000 years

Aquinas’s sister had a grisly desire to keep the right hand of her deceased brother as a souvenir. So his second grave was opened to oblige the lady; the same fragrance filled the air, and she piously sawed off the hand and took it home with the fragrance trailing her. A few years later, having had her fill of the eerie perfume, she gifted the holy limb to a chapel. A priest who wished to see this miraculous hand laughed at the stupidity of the superstition, and was immediately struck with a terrible disease. The man had to repent and promise to tell the story of his experience wherever he went, and was thus cured. It is believed that public recounting the miracles of Thomas Aquinas would cure incurable diseases, and could bring one good tidings. Sceptics conclude that all religious claims are underpinned by stupidity. Such conclusions, no doubt, would take them to burn in hell fire for ever since no sin is greater than skepticism.

Every ten years between November and January the next year, the supposedly well-preserved body of St. Francis Xavier (1506  1552), the man who introduced inquisition among the peaceful fisher folk of Goa, is exhibited in a church in Goa. What you see is a ghastly head with its skin shriveled and stretched across the skull, the rest of the ‘body’ covered in a shroud. 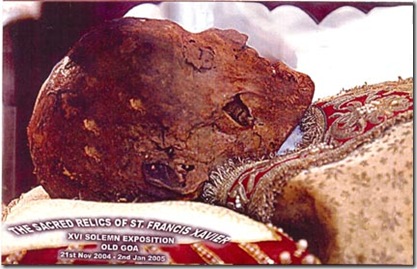 The body parts of saints are in great demand; Saint Xavier’s toe was bitten off by a devotee. Hence nobody is allowed to put a hand inside the sealed casket.  Of the body of St. Aquinas, we no longer know where it is preserved to radiate divine fragrance.

Many were cured by the very mention of Father Aquinas.  Aquinas’s miracles were carefully documented by the monks; shortly after his death the messengers of the monastery carried these documents to Pope John XXII (1244-1334, Papacy 1316-1334). On their way atop a hill, they watched a donkey straining under a heavy load, its legs giving way under the strain and it falling down the precipice. Out of pity, they invoked the name of Father Aquinas whereupon the donkey promptly stood up and walked on as if nothing had happened while  the heavy bundle on its back repositioned itself safe and intact. We hear no story of Aquinas or his disciples taking pity on anyone whose limbs were being methodically broken while he or she spun on a breaking wheel as a result of an inquisition.

The Pope did not subscribe to the idea of beatification of anyone after death – he thought such beatification should be left to God on the Day of Judgment.  Aquinas was a Dominican who practised poverty and lived as a mendicant; Pope John loved to live an ostentatious life and had issued a Papal Bull against Franciscans who, like Dominicans, practiced poverty and frugal living. However, Aquinas’s fame was far too profound to resist; the Pope canonized Aquinas probably under duress from his cardinals. Even today, Catholicism largely follows the theological writings of Thomas Aquinas, which are taught in their seminaries.

Though Aquinas was a Catholic Saint and a doyen of Catholicism,   Protestant apologetics do not care for his sainthood and fame, but freely use his arguments of the Prime Mover and the First Cause to prove the existence of their God. It is a given that once the arguments succeeded and one accepted the existence of a Prime Mover or a Prime Cause, there is no further question that such a God  was the God of the Bible, the Trinity –  the three gods in one person or three persons in one God – not the multiple gods of pagans.

The science that Aquinas relied on was of Aristotle (384–322 BC), who was a brilliant logician-philosopher-scientist of his time  Nobody knew till the advent of modern science in the 17th Century that in his time Aristotle had a wrong set of data to base his arguments on, and  had arrived at wrong (as we see it today) conclusions. Bible gave no clue as to why and how God did what he did – apart from his childish ambition that he alone be worshipped and none else, and His ghoulish ways of securing that need. Another source of scientific data for Aquinas was the Muslim polymath and philosopher Ibn Sina (980 –1037; Avicenna to Europeans) who did not contradict Aristotle on matters such as motion of celestial bodies. The First Cause argument of Aquinas is a direct take-off – or at least influenced by – the logic of Ibn Sina which goes thus:

“Things come into and go out of existence – which means that they are not a necessity. Contingent existence cannot arise unless it is made necessary by a cause. A causal chain in reality must culminate in one un-caused cause because one cannot posit an actual infinite regress of causes (a basic axiom of Aristotelian science). Therefore, the chain of contingent existents must culminate in and find its causal principle in a sole, self-subsistent existent that is Necessary. This, of course, is the same as the God of religion.”

(Quoted  from http://www.iep.utm.edu/avicenna/. “God of religion is a deliberate misquotation; Ibn Sina no doubt used the word Allah).

We find that there is sufficient cause for his peers to allege that Aquinas was influenced by the Muslim Philosopher Ibn Sina  or Avicenna. Aquinas’s attempt at presenting his argument in syllogistic steps also appears to be borrowed from the works of Avicenna.

Next : II. The Five Arguments