Mohamed Ahmed al-Shoreiya Ben Soud’s detention began in April 2003. He was captured outside the house he lived in with his wife and daughter in Peshawar. Khalid al-Sharif, who was staying with Ben Soud, was detained with him.

Both men were native Libyans and were members of the Libyan Islamic Fighting Group (LIFG), a movement formed in the 1990s in external opposition to the authoritarian rule of Muammar Gaddafi. The US State Department labelled LIFG a terrorist group in 2004.

Ben Soud was in US custody for roughly 16 months after which he was released to the Libyans. He remained in jail in Libya for nearly seven years and was released in 2011.

In a series of interviews with Fault Lines, Ben Soud described what it was like in the Dark Prison – and also shared drawings of his memories of how the facility was laid out.

Fault Lines: How did you learn whose custody you were in?

Mohamed Ahmed al-Shoreiya Ben Soud: In my first interrogation shortly after having entered, I was brought in naked and stood there in the interrogation room. They removed the bag over my head. I found a female interrogator with the American intelligence saying to me in the harshest tone as she banged on the table, “You are now a prisoner of the United States of America. You now have no rights since the events of 9/11.”

The prison was basically a warehouse with a high ceiling. It was divided into two sections. One section consisted of interrogation rooms. Another section contained cells where prisoners were held.

Could you see into any of the other cells?

No, you couldn’t see anything. There was an opening that was about 10cm by 30cm below the door. That’s it. It was only for ventilation. There were metal bars through the opening. Perhaps they thought you could escape through the 10cm-by-30cm opening.

The entire building was dark. Inside the room it was dark. There was no light. When they would enter the cell, they would use a headlamp or a flashlight. I would not have known what the room looked like but for the flashlights they used. I would see what’s right next to me. Otherwise you learn by feeling. You figure out what you’re eating through feeling it. This is rice.

The music was miserable and filled the place. It was rock music, ugly and horrific.

What do you remember about the cell?

There was nothing in it. Just a small mattress. Everything else was a regular floor. What stood out to me was the bathroom that we would use, which was a bucket. We would remove the lid, and the smell would fill the room.

The area around the cells would be filled with mice. When they would give you the food, you would see a small amount of it left. The rest was eaten by the mice.

You can still picture it exactly?

Yes, exactly. I lived in this cell for an entire year. I memorised its details and still remember them now. Its measurements, how it looks, the writings I wrote on the wall. These details are carved in my mind.

This ring, which was hung up from the ceiling, we were hung from it, in different positions. We suffered from it a lot. We would be hung for long periods and we would be in tiring and exhausting positions. The prisoner would sleep while his hands and feet hung from the ring. The guard would pass by here and use his flashlight to see that you were awake and not asleep.

The first five months that we spent in this room, we did not take a shower. We did not touch water unless we were being tortured. Our hair was not cut. Our fingernails looked scary. Five months without any care or attention. After five months, on September 3, 2003, they allowed us to cut our nails, to use the bathroom, to wash ourselves, once a week. They started to cut our hair. This was a very difficult time. Everything, every section of this room, tells a story of great suffering.

The water that we used to use to drink, wash and use for the bathroom was two small bottles. Each bottle was 1.5 litres. Three litres a day you would drink, wash your face, that was it. They would not give us clean water, but a metal jug filled with dirty water.

Can you tell us more about how they used the ring?

My left leg was broken. When they would put us in this stress position, they would tie my two hands to my right leg. Right now I have to lean on my left side so that I can have some relief. Even now, if I sit on my left leg, even for a little while, I immediately don’t have any feeling in it. Even if I walk for a little bit, I still feel pain.

We’ve heard about a smaller room where prisoners were occasionally taken.

Did you see it?

It was a cell. Or rather, it was a grave.

There was a rod that hung from the highest ceiling. It was all covered in blood. They would hang the prisoner’s hands from the ceiling, with this rod. So the prisoner’s toes would barely touch the floor. 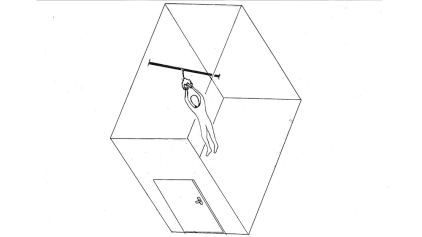 This is what was scary about this place. There were no limits, there were no standards as far as how these people would act. No one was holding them accountable or supervising them.

What do you think they were trying to achieve with this treatment?

I think that the lone intention was to break our spirits as prisoners, to break our will so we would reach a point of personal deterioration and lose hope for everything.