My answer to If I’m on a plane traveling at the speed of light, can I walk to the front of the plane to go to the b…

I am of the opinion that you should keep asking such questions to generate a debate among those who understand the relativity theory (mostly partially), and those who don’t. Unfortunately, Einstein is not among us and even if he were, this question would set him thinking. He was not a pretender to instant knowledge nor ever said his IQ was 160. He evolved his theories from the equations already developed by Newton, Maxwell, Lorentz and a host of many others and was not ashamed to make references to them, or even admit the “Greatest Mistake of My Life”. (A constant he invented to make some equations balance).

Theoretically, there is nothing wrong in assuming an airplane flying through space with the speed of light – at least as close to the speed of light as you would assume in a differential equation (δc). Einstein himself assumed many practically unattainable things to arrive at his Special and General Theories.

To arrive at most of his theories, he used an equation originally derived by Nobel Laureate Henric Lorentz and is known as Lorentz Transformation.

To simplify matters, I will take the case of what happens to your mass if you fly at that speed.

The expression on the left shows the relative mass of a moving body as against the mass under classic conditions when measured on earth.

mrel  is the velocity of the moving body, and c, the most famous short for speed of light in vacuum. The expression on the right would seem innocuous when you fly in an airplane even at Mach2, but begins to turn terrible when your plane’s (or rocket’s) speed (v) begins to approach and then exceed some 90% of the speed of light(c).  (Try sampling v/c= 99.99)

For relative time (time during your flight at that velocity), the equation becomes

This equation shows that your time through your flight falls to a virtual zero or nearly zero when you approach very close to the speed of light c.

From the theory, we can summarise the following:

With these in mind, we will assume a speed very close to the speed of light c (as they do in calculus – without goint in to the mathematics of it – try to analyse your situation 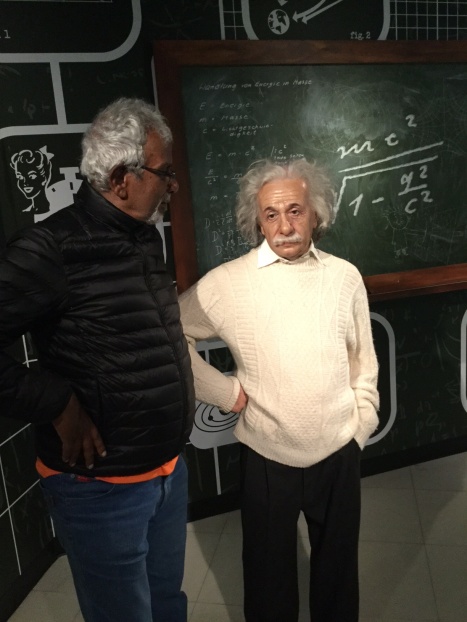 4. However these things might turn out, and no matter how far your target star or planet, you will reach there in (virtual) zero time from your point of view. Hence unless you lacked the common sense to start a journey after a visit to the toilet, you will still not need to go to bathroom. In the plane, you’ll have no time. (For a friend or your spouse watching from the earth, it would appear to be many a long  years, depending on the distance to your target. When you return with the same uniform speed close to that of light, you’d still be of nearly the same age as you started, but your spouse, poor thing, would have gone old, toothless and senile. Figure that out.) Assuming your speed only approximates very closely to the speed of light (say 299,999.999999999 Kms/S), you will reach there in a fraction of a pico (10^-12) second. No time to piddle; not even to sneeze.

I am still a bit dizzy figuring this out myself and fearing that I could have got it all wrong. But when you find and get an offer of a lift in that plane, give me a call. If they took the risk of taking a physically helpless physicist of the caliber of Stephen Hawking in a Vomit Comet that rose sharply and plunged to zero-gravity up in the air, I can risk the humble me traveling in that crushing craft through unknown space.

Note : The terrific image of Einstein in a contemplative pose is from Madame Tussaud’s Wax Museum in Sydney.

If I’m on a plane traveling at the speed of light, can I walk to the front of the plane to go to the bathroom? Would it make me go faster…

2 thoughts on “If I’m on a plane traveling at the speed of light, can I walk to the front of the plane to go to the bathroom? Would it make me go faster…”